Lydford Sports Field is a bit of a success story. It is impressive that in recent years volunteers have helped build a new pavilion. It is great that the village has such a facility although not everyone in the community benefits from it. As one Sports Field Committee Chair admited, writing in the October 2012 Lydford Parish Magazine

"the Sports Field and Pavilion are somewhat underused at present".

Given that so much money has been raised one wonders why at the November 2012 meeting of Lydford Parish Council they were asked for money from public funds to be given to the Sports Field Committee. This request had apparently been made in writing and was backed up at the meeting by the presence and support of no less than three former Parish Council Chairs.

This was not just a one off. The minutes indicate that a recurring annual contribution was being requested. As has been said it is great that the village has a facility such as the sports field, however one might think the cost of maintaining it should fall on those who use it rather than on all council tax payers whatever their financial situation.

Although not on the agenda the parish council decided to discuss the matter anyway. The decision was to give another £600 from the 2012-2013 budget (on top of the £250 given in April 2012) with the option for the Sports Field Committee to ask for more each and every year.

Key questions that should have been asked by Lydford Parish Council are why, given the Sports Field Committee's excellent record of fund raising, is money needed from public funds and (importantly) what will it be used for? One might think that what they spend their money on is nothing to do with anyone except the Sports Field Committee. That is not the case. The Charity Commission, talking about information held on the register say the following:-

"Since charities are accountable to the public, it is important that they confirm or update this information on a regular basis."

It only makes sense that charities should be accountable to the public so that those who donate should know that the money they give is being used wisely. More so when council tax payers' money is involved.

In November 2013 LPC received another request from the Sports Field Committee for financial assistance for running costs. This appears to be a continuation of the attempt made in 2012 to have the parish council cover running costs for the field, said to be some £2,000 annually. During financial year 2012 to 2013 the Sports Field received £850 of council tax payers' money from Lydford Parish Council.

In their November 2013 grant application the Sports Field Committee include a spreadsheet. An extract of this is shown below 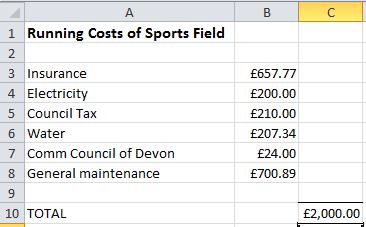 The breakdown of the £2000 running costs is in rough agreement with the figures used by the Chairman of the Sports Field in his November 2012 letter to the parish council. The figure for insurance seems pretty high. One wonders how much this has risen with the completion of the new pavilion. It may well reflect the increase in value of the assets. Despite the figures being given to the nearest penny the total adds up to a nice round £2,000

Lydford Sports Field is a registered charity, number 1074666. Information is supposed to be available on the Charity Commission website. An earlier version of this article published in January 2013 drew attention to the fact that the Annual Return for 31st December 2010 was 438 days overdue and also the list of trustees was not up to date. For a while things improved and the information was updated but by July 2017 the annual update for financial year end 31 December 2013 was 994 days overdue. The annual update had not been received for 2013 or any subsequent year. Fortunately this has been recified with annual returns for 2013, 2014, 2015 and 2016 all being received on 15th September 2017. Failure to make timely submission of annual returns to the Charity Commission is surely something that should be picked up by grant awarding bodies before agreeing to give money to any charity.

For convenience figures from the AGM minutes and the Charity Commission website are given below rounded to the nearest pound. Note that there is a descepancy between the Charity Commission figures for 2011 and those given in the AGM minutes covering that period. It seems likely there is an error in the minutes. Whilst it is possible to see figures for income and expenditure for the Sports Field Committee one wonders just where the money is going and why it is so variable year to year.


The Nicholls Hall is also a registered charity, number 204277. From the June 2017 minutes of Lydford Parish Council we learn that the Nicholls Hall and Sports Field Committees are considering merging. One might hope that such a merger would result in more attention being paid to providing information to the public, to grant providers and to the Charity Commission.

"It is a shame that this use of public funds has attracted criticism..."

Why on earth should a parishioner and Council Tax payer not be entitled to express an opinion on how that tax should be spent? When it comes to donating money or time to a charity people have a choice both in terms of how much to give and which charity to support.

The Chairman's report contains an attempt at justification for using Council Tax.

“.. it is for all to contribute when all can enjoy.”

That would be a ridiculous argument in the best of times as it could be applied to anything, however wasteful, providing it contains an element of pubic access.

The report does actually give some interesting information. Annual running costs for the field and pavilion are said to be approximately £2,000 but if one looks at the income given in the table above then it usually exceeds £2,000 sometimes by a considerable amount. Even allowing for some increase in costs one might have thought that a well-used sports field and pavilion for which a reasonable charge is made, together with active fund raising from those willing and able to give, should be able to cover the running costs.

The idea of a playground was put to the Parish Council at their March 2013 meeting. The playground was to be on part of the Sports Field and the Sports Field Committee Chairman was there to support the idea. The parish council was told that a committee would be set up to drive the project forward but that the Parish Council were asked to consider acting as a umbrella body to obtain planning permission, apply for grants and to run the playground for the future in terms of insurance, annual maintenance, inspection fees etc.

The idea of providing a playground for local children seems good. An item in the August 2013 parish magazine by the Chair of the Playground Committee claimed that the bulk of the money needed should come from various grant-awarding bodies. The first part of the play area was opened in September 2015 but fund raising continues towards a multi-use games area. What has never really been clear is just how much of an annual committement the Parish Council has taken on.

There is a playground website and initially this was quite helpful even carrying committee minutes (Well done!) but it seems to have been neglected of late. At the time of writing (September 2017) it does not seem to be possible to access minutes later than October 2014. Other sections also seem to be rather outdated.

The need for charities to be accountable to the public was brought home by revelations in the Daily Telegraph of 9th August 2013. The newspaper revealed that the number of charity executives paid more than £100,000 had risen sharply. Clearly this refers to large charities but the principle of accountability in how donations and grants are used applies to charities of any size particularly as there are many more small charities than large and they are less closely regulated by the Charity Commission.

The MP Priti Patel is quoted as saying:-

“These are charities not businesses and they have a different set of rules and governances which is why it is important more than ever that there should be more transparency about donations and the way in which they are spent.”

There are three bodies involved with the playground. The Playground Committee, Lydford Parish Council and the Lydford Sports Field Committee. The respective roles of these bodies in the planning, financing and construction of the playground was not made clear. Neither is it clear just what their respective roles are in the running and maintenance of it in years to come.

According to the Parish Clerk the Playground Committee is a sub-committee of the Sports Field Committee not of the parish council. It matters because Lydford Sports Field is a registered charity with its own treasurer and trustees and enjoying certain benefits when it comes to tax and also funding.

"The trustees shall hold the said property assured upon trust to be appropriated and used for the maintenance and improvement of the physical well being of the persons resident in the parish of Lydford in the county of Devon by the provision of facilities for physical training and recreation subject to the powers and provisions as to the general management and control of the said property more particularly mentioned and set out in the second schedule."

Note that "The trustees shall hold the said property .." not the parish council.

This is not a criticism of the playground project. It is great that people are prepared to give time, effort and money to benefit the children of Lydford. The involvement of the Parish Council appears to have circumvented the need for planning permission and ensured ongoing funding from Council Tax which is good news for the Playground Committee and their supporters.

The situation does still seem to be muddled with three bodies involved, the Playground Committee, the Sports Field Committee and the Parish Council. Perhaps their respective roles are made clear in the Playground Management Agreement adopted by the Parish Council at their meeting in Decemeber 2014. Unfortuately that document does not seem to have been made public. At the time of writing (May 2017) the Playground website has no minutes later than October 2014 (check the broken links) and Minutes of the Sports Field Committee AGM are no longer available on the Parish Council website. Considering the sums of money involved one might think that transparency could be improved.